NoMI Kitchen at the Park Hyatt offers a three-course lunch for $22 during Restaurant Week, which is a terrific deal – compared to their regular menu prices, it’s similar to getting a first course and dessert for free. Compared to my previous lunches for Restaurant Week 2015 and Chef’s Week 2015, my main course fell a bit short, but the dessert was distinctly better. The service was also more attentive. 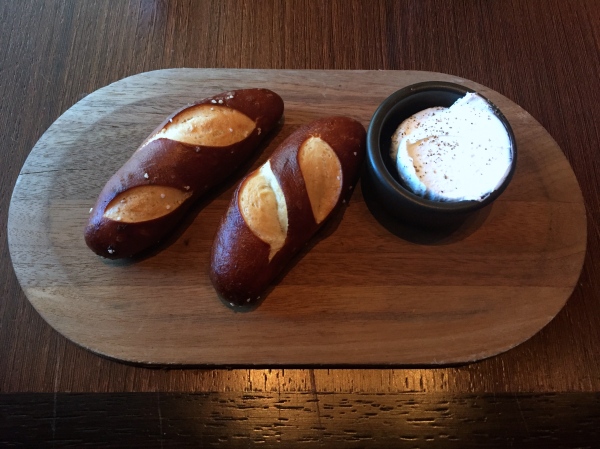 Lunch starts once again with hot pretzel rolls and a tangy, stark white whipped butter. The rolls have a pronounced pretzel flavor that seems somehow at odds with the rest of the restaurant. 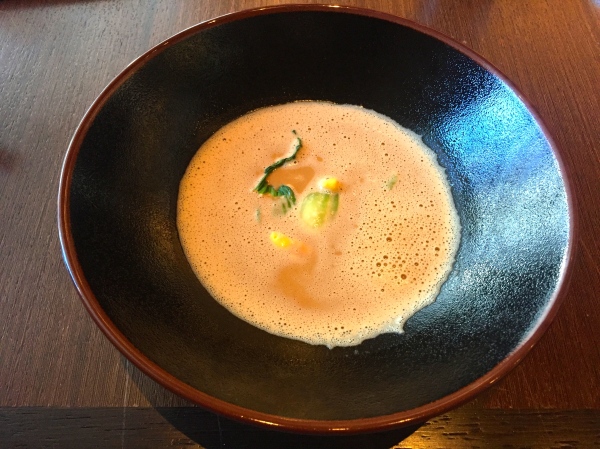 I debated between the lobster bisque and a celeriac soup for my first course. My server told me that the lobster bisque is a touch salty, which he personally likes, but he did want to warn me. He suggested that I start with the bisque, and if it’s too salty, he’d be happy to bring out either the other soup or the salad. The bisque has nice depth of flavor, and the diced mango adds tartness. It’s not overwhelmingly salty at first, but after a few sips, the salt begins to build up.

Shortly thereafter, my server checked in with me about the bisque and then brought out the celeriac and truffle soup. It’s creamy but not thick, drizzled with olive oil, and not too heavy. The sweet apple jam keeps it from being all one flavor. Three coins of potato add a hint of earthiness. It’s not as interesting as the soup from last year, but there’s something rather lovely about it. The lobster bisque is more complex, but it would’ve worked better in a smaller portion, perhaps as an amuse bouche – a portion not large enough for the salt to take over.

I again chose the fish for my entree. Given my previous experience with black cod, I was hoping for a fattier fish with an almost melting quality texturally. Instead, I received a firm, meaty fish very similar to halibut, with the minuscule amount of consommé poured tableside. The real problem, aside from the bone that I discovered when I took a bite, is that salt is the predominant flavor. Even saltier than the bisque, the salt in the main course overpowers the dish’s mild flavors. On a more positive note, the skin is crispy around the edges, although I would’ve preferred to have the entire skin of the fish be crisp. 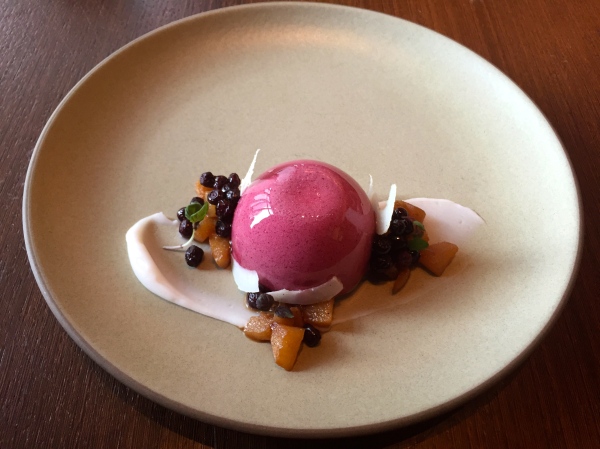 Given my negative feelings about the cookies and candies dish during Chef’s Week last year, I chose the plated dessert, and it was the right choice. The dessert is very pretty, with a glossy clear liquid coating the outside of the mousse bomb. The coriander financier adds a savory note at the bottom of the mousse, which is mildly fruity and light, not too sweet. The garnish of pear and huckleberry, along with the coconut foam, looks nice, but the chunks of pears are grainy and still hard, although the tart huckleberries are a good addition. At the core of the mousse bomb is a shockingly tart lemon sorbet, which makes it interesting and memorable. Thanks to that lemon component, it’s by far the most successful dessert I’ve had at NoMI.

Overall, I was less impressed by the soups than I have been previously, and although the fish was particularly forgettable, the lemon in the huckleberry mousse bomb dessert gave it enough of a twist to make up for the weaker main course. It’s still quite a deal during Restaurant Week, however, and I’m glad that I made time for it, although the execution is uneven enough that I don’t know whether I’d return to pay their standard prices.

Theatres Nearby: Lookingglass Theatre is just across Michigan Avenue. NoMI is two blocks away from the Chicago Red Line station, so it’s just a few stops away from the Steppenwolf Theatre to the north and to the south, the Goodman Theatre, the Oriental Theatre, the Cadillac Palace Theatre, and the Bank of America Theatre. The 66 bus will also take you from NoMI directly to Navy Pier for the Chicago Shakespeare Theatre in about fifteen minutes.