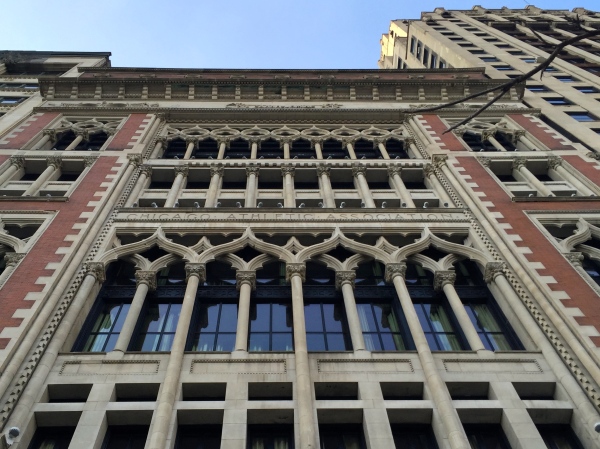 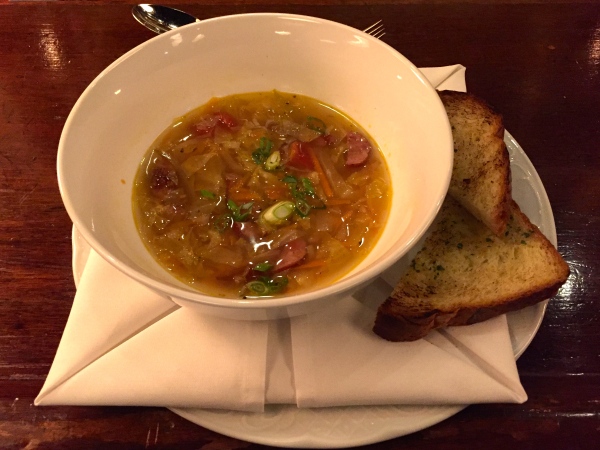 To start my meal, I chose the cabbage and sausage soup over the chicory salad. It arrived in a huge bowl, a rather salty broth tasting of chicken with chunks of mildly flavored sausage, cabbage, and tomatoes. There’s something sort of nice about the tender cabbage and meaty sausage, but it also feels like something I could make. The accompanying bread is thickly sliced yet unexpectedly delicate – airy, lightly grilled, and slightly garlicky. The garlic bread might be my favorite part of the dish. 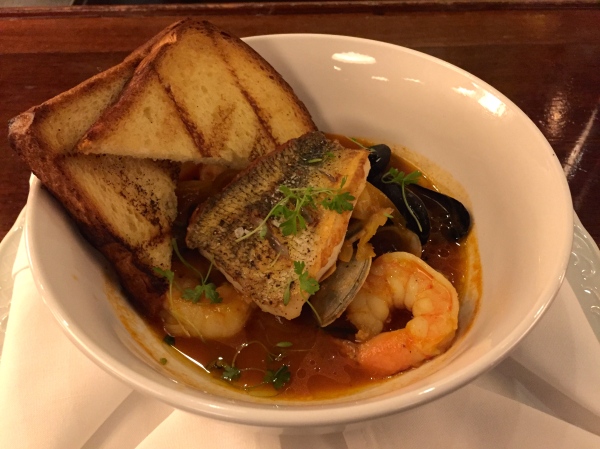 Cherry Circle Room offers three lunch entrée options – a vegetarian risotto dish; a fish dish, which I chose; and a wild boar sausage sandwich. The fish is very nicely cooked, as are the shrimp, although the fish skin could be crispier. The broth is spicier than I expected, so the saffron doesn’t come through, although the olive oil drizzled on top is very present. Accompanying the fish are three each of shrimp, clams, and mussels. Perhaps I shouldn’t have chosen two soups, but my bartender server said it was a solid progression, and I didn’t realize the entrée would be a soup. Still, it’s more flavorful and more interesting than the first soup, although it is served with more of that tasty, toasted bread, just without the garlic. 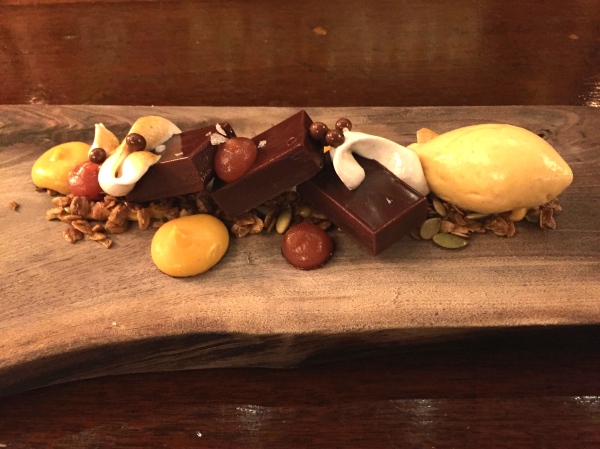 There’s only one dessert offered for Restaurant Week, a quenelle of pumpkin spice ice cream and three bricks of smooth chocolate peanut butter ganache carefully plated atop pepita granola, which adds a delicate crunch. A ribbon of marshmallow-like meringue, dabs of apple butter and pumpkin purée, and crispy chocolate spheres complete the dish. The chocolate and pumpkin are an odd combination, but I do like the peanut butter chocolate and those bits of salty, crispy chocolate, which are almost buttery like popcorn.

Although I wasn’t particularly impressed with my first course, the meal got progressively better and ended on a strong note with the dessert. That soup is also the only part of the meal that isn’t on their regular menu – the walleye is typically $28 at brunch, and the chocolate pumpkin dessert is $12 – and while I wouldn’t pay their standard prices for the meal, those same prices make it a good choice for Restaurant Week.

Theatres Nearby: Cherry Circle Room is just a few blocks away from the Harris Theater and the Bank of America Theatre, and it’s about half a mile away from the Goodman Theatre, Oriental Theatre, and Cadillac Palace Theatre. It’s also under a mile directly east of Lyric Opera, easily accessed by the 20 bus, and Lookingglass Theatre is about a mile north of the restaurant along Michigan Avenue and the 151 bus route.